When you live safe all the time you tend to forget you are alive. Not in Japan! The thrill of life is always present in Japan. Typhoons, earthquakes, and the mountain on fire….

But one night the mountain was on fire….. I freaked out…. because the fire flowed down from the left side of the mountain and the right side. “The mountain is a volcano!!!! It erupted and the lava is flowing down.” I immediately warned my friends. We were all stunned looking at the mountain that was on fire. We had no idea what to do. One of our friends was even thinking of evacuating.

The fire kept going down and down. We barely spoke Japanese at that time so we were not sure what to do. Then one of our friends Googled and found out that we should not worry. The mountain is intentionally set on fire to celebrate something…
Apparently, it is a matsuri aka a festival. It is called the Hatto Onsen Matsuri. On the first day of the festival, the Beppujin (Beppu townspeople) would set Mt. Ogi on fire to celebrate the start of the onsen festival.

Beppu is known for its onsen (hot springs). Beppu has so many onsens that it gushes out 130,000 tons of water every day! As the Beppujin are grateful for the onsen in Beppu they thank the onsen god by setting the mountain on fire. The fire is very controlled and every year the Beppujin do a different pattern for the fire to follow but on that day the fire looked like lava as flowed from both sides of the mountain. There is no risk of forest fire. In fact, this particular part of the mountain has no forestation at all due to this festival.

I was a bit disappointed though, lava mountain sounded so cool.

Earthquakes
According to livescience.com, there are approximately 1500 earthquakes a year in Japan. Of course, the vast majority of the quakes are minor ones that you probably never notice. Nonetheless, they are counted as an earthquake. The last major earthquake of 9.0 on the Richter’s scale was in 2011 with the nuclear reactor disaster in Fukushima.
On April 16, 2016, there was an earthquake with a magnitude of 7.0 in the Oita prefecture. I came to Beppu in 2017 so I did not experience an earthquake of this magnitude. Though so far I have experienced quite some earthquakes in my life, some in Morocco and one in Italy, but I already have experienced more quakes in Japan than anywhere else.

You could do three things during an earthquake in Japan. The first one is obviously mankind’s first reaction: panic. This will not help yourself or others.
When the 7.0 earthquake occurred one of my professors told us that many international students were so afraid of the earthquake they went back to their home country for a short period…. *facepalm*. There is no point going back as they have actually survived the earthquake, there will be only a few aftershocks but they are never stronger than the former earthquake. It is just a waste of time and money…

Two: Remain calm and hide your head under a table. Or three and be an idiot like me and laugh at the earthquake. There are so many earthquakes it doesn’t scare me at all. I actually slept through a couple of the quakes lol. It is so common in Japan I just shrug it off, and you should too. 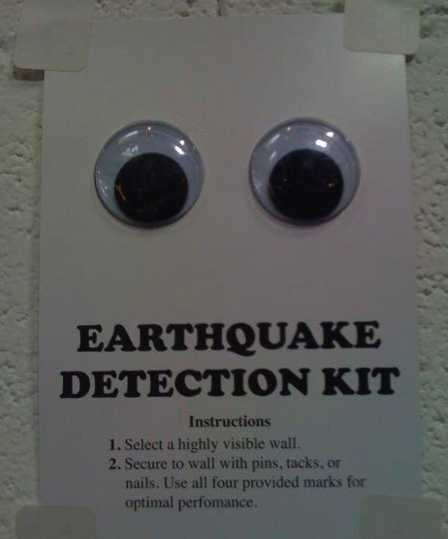 Typhoons
The summers in Japan can get extremely hot. The weather is very tropical. As it is a tropical climate, typhoons are a common thing in the summers. So far I have experienced four typhoons. The typhoons did not go through Beppu and did not cause a destruction on their path, but they were quite close. So close that you could see it changing the weather. The sky is dark grey and the wind is stronger. The wind is always strong in Beppu, but when the typhoon is close it feels as if someone is banging on my window for days.

Again, you could do three things. one: panic, two: just remain calm, or number three open all your windows and welcome the typhoon with open arms! Before I explain to you why let me tell you that the typhoons are not as dangerous as the earthquakes. When an earthquake happens, it is everywhere around you and you cannot escape it. However, a typhoon goes a certain path and you can anticipate it days prior to its arrival. Now let’s go to the next section: the summer….

The summer
In Europe or more specifically in the Netherlands I would always prepare myself mentally for the winter. I hate the winter with a passion. Though the winters are less cold than in the past decades (thank you global warming), but still it can get very cold. I start to get worried about the winter somewhere in September/October. The nights start earlier and remain longer, people become sad/depressed, and the cold winds getting tougher. When spring starts it feels like an achievement.

But when the summer starts in Beppu it feels like I’m literally melting. I have experienced the hottest summer in Marrakech, Morocco, where the weather would go up as high as 45°C but at least the air is dry. In Beppu, as we are quite far south, the climate is extremely tropical and the humidity gets up to between 90% and 100%. When the humidity is low sweat will evaporate faster on your body but when the humidity is this high it does not evaporate at all and as a result, the weather feels way warmer than it actually is. August was by far the hottest month.

I could barely leave the house. I would go to a store that is a little bit downhill. It takes less than 5 minutes to get there. When I did arrive at the store the sweat would be running down my back. I would stay in the store to cool off as they have an AC. Now imagine me going back home up-hill in the extreme heat and high humidity.
When a typhoon passes our island, I embrace it and welcome it any day. During this time, we cool a bit off. I never turn off my fan as it is my best friend. Heck, get yourself two fans and never turn them off. Without a fan, you will literally melt. The warm summer days are unbelievable… What comes with the extreme heat is the bloody insects that I still do not know how to pronounce; cicadas. Is it pronounced sisadas or kikadas or sikadas or kisadas. Doesn’t matter, they make the sounds of 5 million rattlesnakes starting from 7 AM. I hate dem bugs and I hate the summers in Beppu.
Summer of 2018 is coming…… I’m afraid…. Tell my mom I love her…..

I am being ludicrous about the weather and nature in Japan because there is nothing to worry about. My family would warn me to be careful because of the earthquakes, but the quakes are not that scary at all. It is the same nonsense when I am telling them that the Netherlands is 1 meters below sea level and they would be having a pool in their garden very soon. The earthquakes happen randomly over all of Japan and most of the time you would not even notice them. I laugh at those who panic and get scared of them. For me, it is a time that I realize that I am still mortal and I remember that I am still alive and kicking ;).

Note: By no means is this an actual survival guide. Just a fool’s guide :p